Earlier this month, I took part in ritualized torture. Others call it an Ignite presentation.

Ignite, for the unignitiated, is something of a nerd presentation death march. You have a topic, which you propose. You have five minutes, which is firm. You have 20 slides, which relentlessly auto-advance every 15 seconds.

You do not have notes. 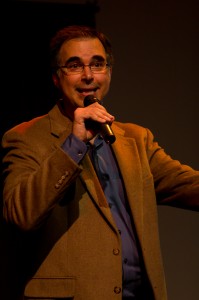 At the suggestion of a couple of previous Ignite presenters, I proposed a talk for Ignite Seattle 11 that was aligned with my personal interests, and about which I felt passionate enough upon which to pontificate: “How Science Is Destroying My Childhood.” My pitch: “I love science: As a kid, I marveled at planets such as Pluto, wanted to see a real dinosaur, and enjoyed mysterious sea creatures. My love of science spawned a career including stints as a science and tech reporter, science-fiction writer and, lately, tech industry consultant. But science is slowly erasing my childhood, and Pluto was just the start. It appears no planet — or creature — is safe.”

Having never even attended an Ignite before, I did not expect to be selected on my first pitch attempt. But not only was I selected as one of 14 presenters at Seattle’s King Cat Theatre, I was selected to go first.

How did I survive? By doing three things:

The result? In front of a real audience the very one time it counted, I didn’t forget a single key part of my story arc. I didn’t run out of time. And I didn’t fall off the stage.

I’ll post the video once Ignite has it available on IgniteShow.com so you can judge for yourself. All I can say is, I’m glad I did it. To paraphrase Samuel Johnson: Nothing so wonderfully concentrates the mind as the certainty one is doing an Ignite presentation in the evening.

Update 3/25/11 Ignite has posted the video of the talk, recalling that joyous, terrifying time: